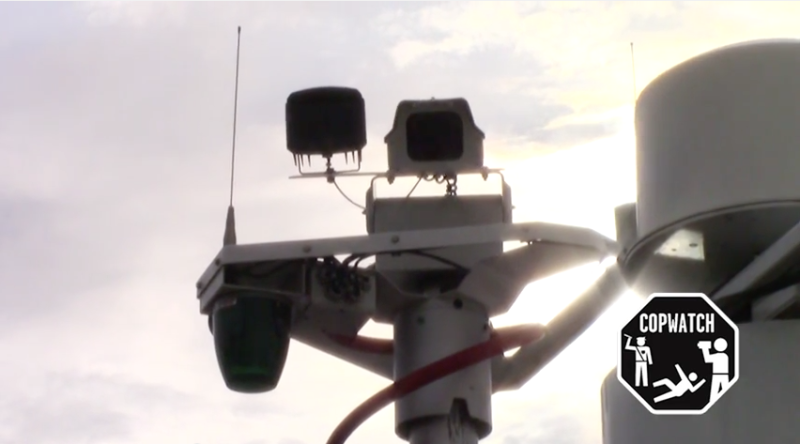 As gentrification places a firm grip on West Oakland, the city has been clearing public spaces of black faces by shutting down and fencing up parks once enjoyed by many. This has been achieved through heavy-handed policing resulting in increased displacement of West Oakland residents, ensuring space for new outsiders.

The Filbert St. park on San Pablo and 32nd is one of the last open spaces in West Oakland that remains opened and used. These parks are often cleared and replaced with “Community Gardens” which are traditionally organized and run by gentrifiers, or they are fenced up in the name of “beatification” only to be re-opened when the surrounding neighborhood has become inhabited by a community of a higher economic bracket.

The Filbert St. park was fenced up back in late 2014, only to be torn down a day later.

But today the park has a new friend. An Oakland Police Mobile Command Center sits across the street from the park surveilling everyone and anyone in the immediate area.

An Officer on site explained that the purpose of the surveillance vehicle was to serve as a deterrent to crime, and to function as an fully operational intelligence gathering center. He also mentioned that the command center was put in place in response to a recent murder of a young man who resided just down the block.

Failed Solutions.
WeCopwatch knew this young man, he was a sweet person, and his death came too soon.
But this kind of intelligence gathering/deterrent is disconnected, expensive, and is a poor solution.

It’s ironic that just two months prior, Oakland Police raided this young man’s residence likely with the intention of imprisoning him for a long time.
Their raid yielded nothing to speak of. Their armored vehicles and men with assault rifles and flash bangs were outrageous, unnecessary, expensive, and a poor solution.

Imagine if the thousands spent in that raid, and these intelligence operations had been applied toward building people

up, not breaking them down.
we might be living in a different world. . .

One thing is clear, the overt surveillance being conducted is awkward, it is being conducted on longtime local residents, and is a sign that more police activity around the Filbert St. park is to follow. While the city of Oakland flaunts its newly developed downtown area, this “revitalization project” has come at the cost of the residents of Oakland. Gentrification, along with a brutal police force, has displaced black and brown residents as a means to “clean up” the neighborhood. AfrikaTown is a community effort to provide a different alternative, one that supports and lifts the existing community rather than displace it. AfrikaTown is already an important and necessary aspect of West Oakland, where people come to gather, celebrate, and eat.

Within AfrikaTown is Qilombo, a community center that offers workshops and events to the residents. It has a bookstore, a free store, and a food distribution program. Adjacent to Qilombo is a garden that has been transformed over the last year to provide fresh vegetables for the community, with a beautiful mural that depicts struggle across the black diaspora. Hundreds of people have helped to bring AfrikaTown to life, and we need more support than ever to see it continue.

Come out and support so we can see AfrikaTown become an established community in our city.

WeCopwatch supports Africa Town.
See You in the Streets

On December 6, 2014, the Berkeley Police, assisted by other agencies, attacked scores of demonstrators protesting the Grand Jury decisions on the Eric Garner and Mike Brown killings.

WeCopwatch, Berkeley Copwatch and the National Lawyers Guild are collaborating on a People’s Investigation into the Berkeley Police response on Dec. 6, 2014, and NLG lawyers are considering legal action and conducting confidential interviews. On November 5th, 2010, Oakland Police swarmed a group of Oscar Grant demonstrators as they marched towards the Fruitvale Bart Station in East Oakland.

For those who don’t know, Oscar Grant was a young man who was killed on video, Jan 1 2009 by BART Police in front of scores of people.

This killing would bring people together all over the bay, state, country, and world around police murder and violence.

This group in particular was heading towards Fruitvale Bart station when they were illegally surrounded and arrested for “remaining at the scene of a riot.”

The National Lawyers Guild sued the city of Oakland and just this summer settled for over a million dollars, citing OPD inability to follow it’s own crowd control policies.

Take a peak at this video produced about police actions that day. .

For more info about Oscar Grant go to:
https://www.indybay.org/oscargrant

This raid took place early this morning at Elijah’s University Institute of Islamic Studies on 27th street just off San Pablo in West Oakland.
Information is still coming in.
Oakland Police conducted the raid.
Agents in costumes conducted the search.