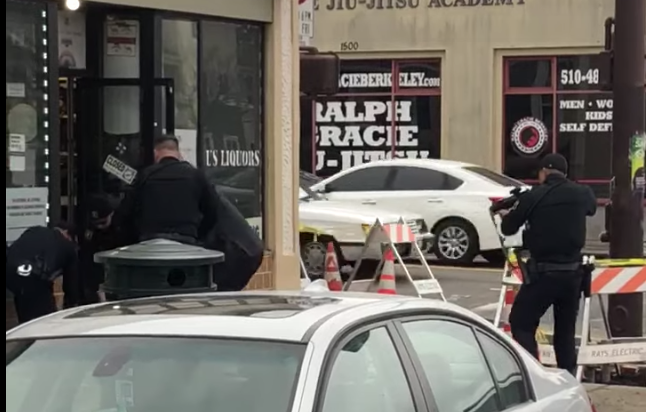 Video Shows Unarmed Black Man Kneeling with Hands Up
On March 14, 2020 at about 5:15 pm in front of US Liquors in Berkeley, an African American man was on his knees with empty hands outstretched while five Berkeley Police officers detained and then shot him with a “less-lethal” round. In a video recording of the incident provided to Berkeley Copwatch, the man is seen talking to the officers, one of whom is standing about 12 feet away and pointing a less-lethal weapon directly at him. At least one witness recorded the precise moment when the officer decided to shoot what appears to have been a rubber bullet directly at the man’s torso. The man collapses in pain and is quickly surrounded and handcuffed by the other four BPD officers on scene. According to another witness, the man was taken away from the scene in an ambulance.

Troubling questions about the incident include:
● If the man was on his knees, unarmed and surrounded, is shooting him in this situation misconduct or a crime?
● What happened to this man? Was he arrested? Released? Why is it not possible to get information about this incident?
● Was the fact that he was on his knees evidence that he was already following officer commands? How did officers justify this shooting in their report?
● Where are the records of this incident and when will they be released?

Copwatch has made every effort to provide this video to the unidentified man so that he can use it in his own defense. If members of the public recognize him, please let him know that we can help connect him to additional witnesses.

It is very troubling that our requests to the Berkeley Jail asking for the name of the individual in question were denied. Calls to the Public Defender failed to locate any person or incident meeting this description. The District Attorney provided no assistance other than to suggest that we file a complaint with the Berkeley Police Department’s Internal Affairs Bureau (which we will not do because we do not believe they should be investigating their own crime). Because the man was taken away in an ambulance, medical professionals will not disclose information about the individual. Our California Public Records Act (CPRA) request to BPD was met with a form letter explaining that CPRA requests will be significantly delayed in Berkeley due to the COVID-19 virus.

Copwatch understands that these are difficult days for everyone and that many local departments are understaffed. However, without publicly available information of who is arrested and on what charges, our city runs a very real risk of “disappearing” people. If there is misconduct, there becomes no possibility of public accountability.

● We demand public release of the police report, Use of Force reports, and access to the body camera footage from all officers involved in the incident.
● We demand the immediate suspension of all officers involved until all relevant evidence is produced and this incident is thoroughly investigated by Berkeley Copwatch and independent experts. Copwatch will conduct an independent, People’s Investigation. We will collaborate with credible professionals including Adante Pointer, civil rights attorney with the Offices of John Burris. In response to the footage, Pointer explained, “We don’t know the full picture, but based on what I see, this is someone who has complied, was on his knees and was not a threat. Why would these officers use that type of force? At that range, these munitions can cause serious injury or even death. Berkeley police need to account for this behavior by its officers and an independent investigation of this incident is definitely warranted.”